Did you know that the concept of “Soulmates” can be traced all the way back to Greek Mythology?

In our modern world, we are taught that everyone has a soulmate, or “another half”, as they say, but actually the first to talk about this idea was the Greek philosopher Plato and his playwright Aristophane, who both introduced the soulmate Greek mythology.

The idea of “Soulmates” has probably been mentioned in most of the world’s biggest philosophies or religions, as even the Bible talks about “Adam and Eve”, and about the importance and sacrality of marriage – the union between one man and one woman, which is the main structure upon which society as it we know it is built.

The concept of romantic soulmates is widely explored through movies, books, and poetry and it’s widely embedded in our consciousness.

Most people spend their lives trying to find “the one”, “their better half”, and prioritize finding a romantic partner above everything else.

Even modern New Age Spirituality talks about the importance of finding your Soulmate or Twin Flame (which could, in fact, be a different name for the Greek mythology soulmate).

Greek mythology, even though it’s one of the oldest mythologies on planet Earth, has always taught us valuable lessons about life and about ourselves.

When it comes to soulmates and romantic relationships, Greek mythology is a true source of wisdom and guidance.

Thus, by understanding what Greek Mythology teaches us about soulmates, we can understand a lot about us as human beings, our emotional and spiritual needs in relationships, and the reasons why we relate to romantic relationships the way we do.

The first philosopher to talk about soulmates in Greek mythology was Plato. In his philosophical text “the Symposium”, Plato uses the voice of the comic playwright Aristophanes to describe the “first humans” and how Zeus’s revenge upon them has created what we call today “Soulmates”.

According to Plato, in Ancient Times, there were three types of humans on the planet – men, women, and “androgynous”.

Men were the children of the sun and had two male genital organs. They were filled with solar, powerful, impulsive energy.

Women, daughters of the Earth, had the same soft, delicate, and nurturing energy as their mother, and two female genital organs.

The third category, the “Androgynous”, were children of the Moon, because they were formed by the Union of the Sun and Earth – and had both male and female genitalia.

The Androgynous were beings who literally consisted of a man and a woman merged together – they had two faces (one male, one female), four legs, four arms, and both types of genitalia.

They were merged at their rears and looked a little bit like siamese brothers, except that they had more limbs and two heads glued to one another.

Apparently, that is not all, because these Androgynous were extremely powerful beings, who had supernatural powers so amazing that at some point, they refused to worship the Gods and started defying them.

The Androgynous could fight the Gods, could provide for themselves, and were able to do literally everything that they wanted to.

Thus, one day they decided they don’t need Gods and started a war to eliminate them, as now, they wanted to be Gods themselves.

I mean, why worship a God and listen to what it tells you to do, when you have all the God’s powers yourself, right?

Needless to say that this defying attitude made Zeus – the highest of all Gods – very angry, and he decided to teach the powerful Androgynous humans a lesson.

This leads us to the story of the Origin of Soulmates.

To teach the powerful Androgynous Human a lesson, Zeus casts a lightning bolt that cuts all of them in half.

They are no longer powerful beings with both male and female qualities, but now they are weak, miserable, and suffering, chaotically looking for their “other half, because their body, mind, and soul are in terrible pain without it.

Also, the cruel Zeus leaves their genitalia at the back so that they cannot enjoy the pleasure of making love, and their whole body is full of wounds.

Zeus was so angry that he even threatened to cut the Androgynous in half again, leaving them with only one leg and one arm, having to “hop to get anywhere”.

Thus, the almighty complete Human who could do anything he desired and had the power to defy the Gods, becomes two “humans” now, who have completely lost their power, happiness, and direction.

The Humans were in severe pain, and some of them started wandering on Earth in desperate search of their soulmate, copulating with the Earth and producing Insect- like children or allowing themselves to starve to death.

The Intervention of God Apollo

Apollo, the God of Truth, Healing, Music, and Dance, decides that he cannot bear to see the humans in such deep pain.

He healed their skin and the physical wounds left by separation, leaving only the navel as a reminder of the punishment.

Then, he moves their genital organs to the frontal side of their bodies, so that they could at least enjoy the pleasure of making love.

Thus, humans start procreating and their children are considered an offering to the Gods – as now there are more people who can worship them and give offerings.

They start being happier and start learning what romantic love is, as when they are in a couple they feel more complete and happy.

Some of them have found their soulmates, some just keep making children – but all of them have as their primary purpose fulfilling their desire for company and romantic love.

They are no longer powerful and proud beings who defy the Gods, but rather they are humbled beings who are searching for their other half in order to feel a bit of happiness, and who bring offerings to the Gods again.

If you like this story and want to read more about the story Plato wrote, as well as to see a very nice graphic illustration of it, click here.

I keep wondering what is the spiritual meaning of this story about the human being that was split in half, and if it can be a coincidence that the story of the Twin Flame or Soulmates talk about the same thing.

What could have Plato known, back in the days, that made him write this story ? Was he just trying to find an explanation for people’s behavior regarding romance, or did he actually have rare spiritual knowledge that made him understand that people are searching for their soulmates and Twin Flames?

I think that the truth behind the story was a bit of both.

Plato was a very intelligent man, way ahead of his era and he did notice that people tend to feel that they need a romantic partner to feel happy and complete.

But also, like most geniuses who are well ahead of their era, Plato felt that there is a spiritual cause why people crave a romantic partnership so badly, and he just managed to write a beautiful story in which he explains the concept of Soulmates and Twin Flames through a metaphor.

If souls were indeed split in half so brutally before incarnation, it could explain why, as human beings, we crave connection, love, and intimacy since we are born, and we find the most fulfilling type of love and connection through romantic partnerships and sexuality.

This can illustrate how powerful the soul is when it’s whole – having manifestation powers that are God-like, in contrast to how weak is one half of the soul when it’s separated from the other half.

Other Greek philosophers and theosophers after Plato have spoken about the story he depicts in the “ Symposium”, and have added some other explanations as well.

It is said that the two “halves” of the human who was split in two are helped by the Universe to reunite and to become whole after they have paid all of their karmic debt and understood their spiritual lessons.

Until then, they just keep meeting through various incarnations, to learn from each other.

To me, this is very similar to the story of the Twin Flames – who also happen to be two halves of the same soul, who look for each other crazily through incarnations, yet they can only reunite after they have paid their relationship karma.

Also, another element that the two stories have in common is that they both talk about the pain of separation and the feeling of hopelessness that the halves experience after being separated from each other.

Thus, whether this story is the origin of the Twin Flame idea or not, I don’t think it’s a coincidence that so many ancient philosophies and religions speak about the soul being split in half and about the reunion of the two pieces.

Even though I also believe that we are unique spiritual beings, meant to learn and grow spiritually on our own path, I believe that it’s just as true that we have soul mates and that we come from a bigger soul family that will help us on our spiritual journey.

I also believe that the Ancient Greek Mythology is amazingly powerful, and I find it amazing how we can encounter beautiful, life-altering truths in Plato’s writings – truths that can help us grow and learn about ourselves even now, thousands of years after they’ve been written.

I would also love to hear your opinion about Plato’s story and about the Soulmate Greek Mythology, so whether you’ve enjoyed this article or not, write us a comment in the comment section below and share your feedback with us! 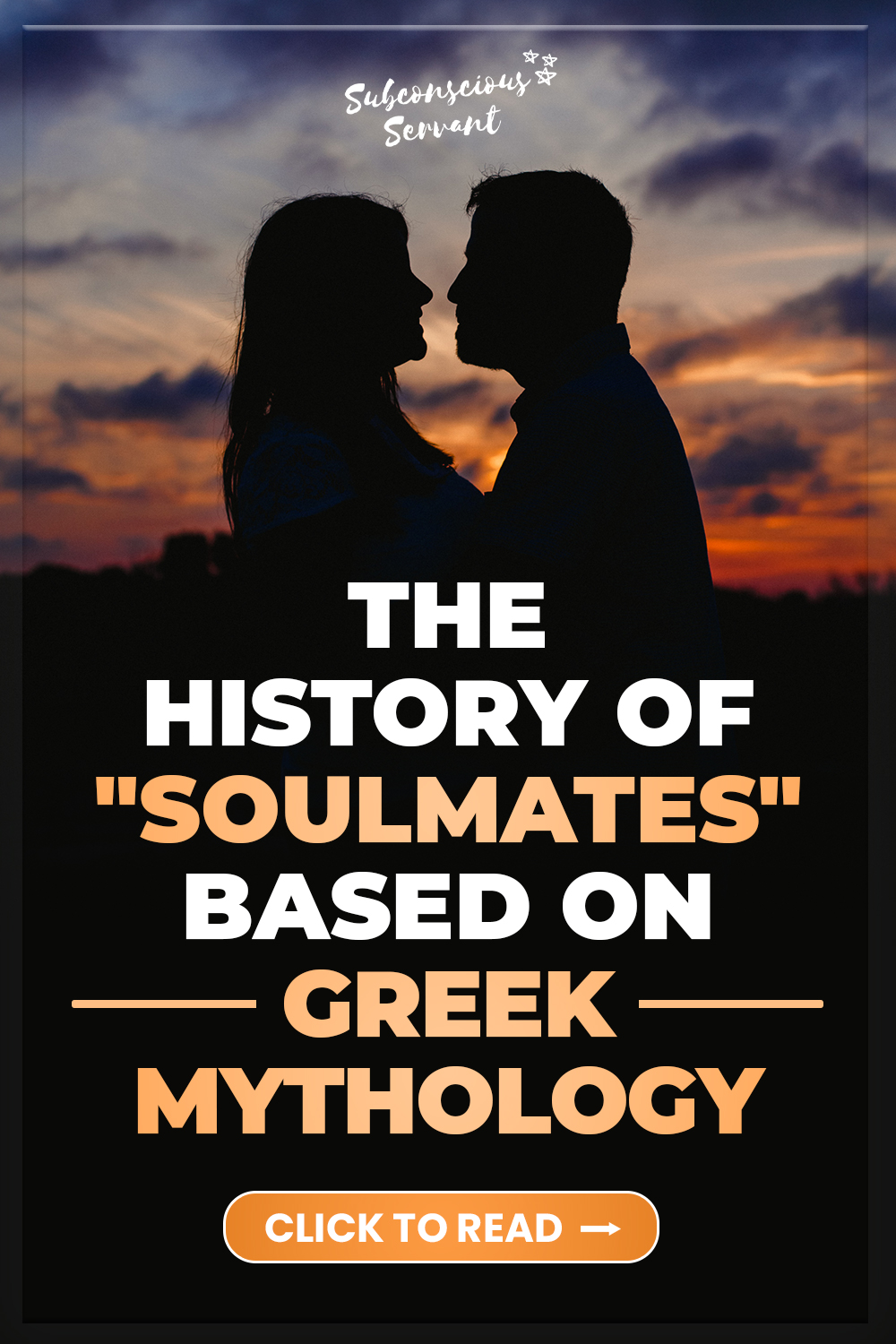 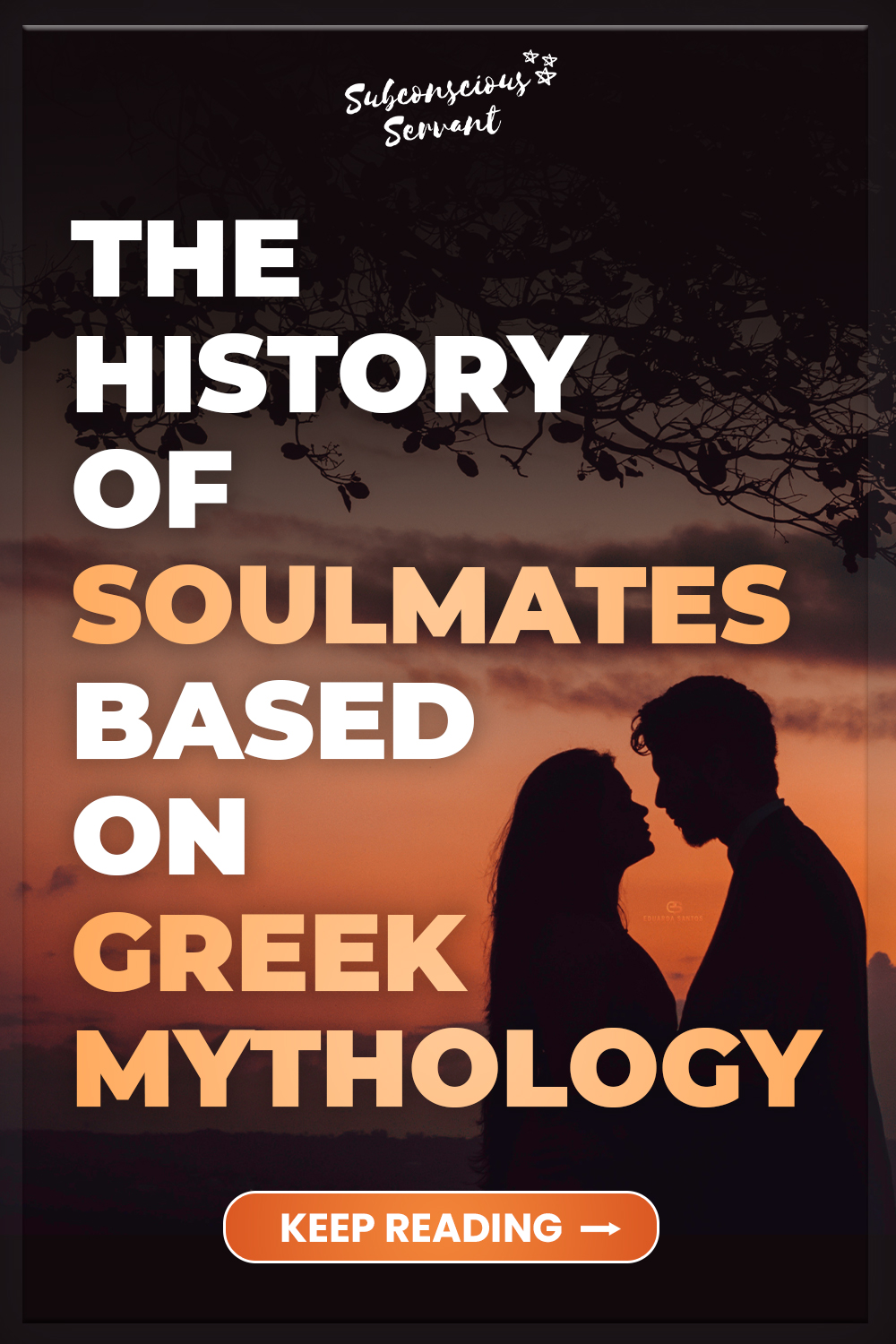 Next post Soulmate vs Life Partner: A No BS Guide